I know what you're thinking and I promise that I have not decided to change this to a blog about science or plants or any other such nonsense, especially not on a Monday.  Mondays are for music around these parts and today's song is a really catchy one.  As a bonus, the singer is easy on the eyes and the video is full of cute kids.  Happy Monday!

Let's Go For A Ride

Do you know what I miss?  Riding a bicycle!  It's been years since I was on a bike.  There's a really cute one sitting in the garage, so I don't even have a great excuse, other than it probably needs new tubes and tires.  I suppose winter is probably not the best time to decide I'd like to go for some leisurely bike rides, the aforementioned bike does not have gears or even hand brakes, but the weather has actually been really mild this week.  Besides, now that I've made this little wishlist, I really do want to go for a ride! 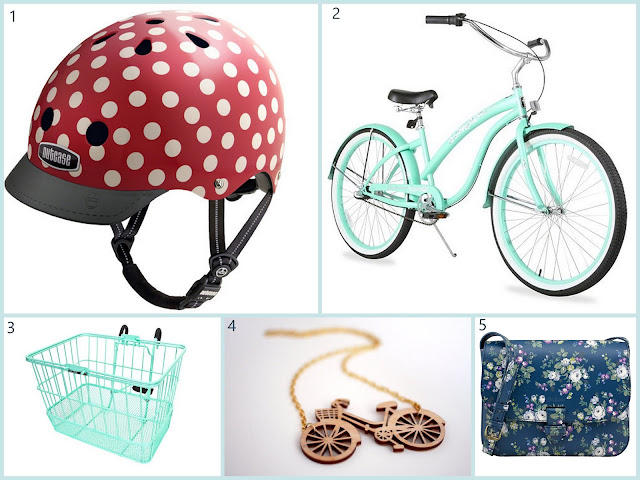 Email ThisBlogThis!Share to TwitterShare to FacebookShare to Pinterest
Labels: wishlist

Hello From The Outside

I should start off by apologizing for the title, but there's really no escaping that Adele song!  Well I made it to that milestone 500th post and then I just sort of fizzled out.  I didn't mean to disappear for over a month.  When life happens, this blog tends to be one of the first things that get neglected, despite the fact that this blog kind of helps keep me sane!

My mom has been having some health issues that have been really stressful for her and, since she lives in our home, they've been stressful to all of us too.  She'll be okay, but it's been tough couple of weeks around here.  What started out as an inflamed appendix and routine appendectomy, has led to her having to face some on-going issues that I think have largely been ignored.  My mother doesn't really do the whole doctor or traditional medicine thing and as frustrating as that often is to me, I have finally started to accept that she's an adult and only she is in charge of her health.  I can only support her and hope that she chooses the best options.  It's a terrifying feeling to think about a parent dying, though, especially from things that could be treated and managed.  What's more terrifying, though, is my children losing their grandmother.  Here's where I struggle to accept her decisions, because they aren't really just affecting her.  Oscar has asked me is she's going to die.  Both boys ask what's going to happen to grandma and will she go to the hospital.  I don't have answers for their questions and they aren't really questions my four and five year olds should have to be asking right now.  It feels really good to get this out, even if it doesn't change anything.

I've probably sucked at self-care lately too and I've been doing that thing where I end up soaking up the stress around me like some kind of silly super sensitive sponge.  This seems to be one of those crazy times of year where everyone seems to have issues.  I try to be empathetic and supportive, but sometimes I end up taking those issues on almost as though they're my own.  It ends up being fucking exhausting, to be most perfectly blunt, and then I have to give myself a big pep talk and attitude adjustment.  In the past week or so, I have really started to let the stress go as much as I can.  I had to really make a conscious effort to do so, but it's working.

On top of everything mentioned in the previous paragraphs, I've been in craft show prep mode again. I'm selling at Handmade Arcade again this year and trying to get ready while dealing with everything else going on nearly defeated me.  I definitely had moments where I felt like just forgetting about the whole thing and just selling what I had made online.  I'm glad to report that with exactly a week left, I am feeling really prepared.  I have tons of fun stuff made that I've been sharing on Instagram and will try to share here later this week.  I really should give myself proper credit for managing to get so much made, in between caring for a family, working full-time, and trying my best to not completely shut myself off from friends.  Good job, Molly.  You get a gold star!

If you've made it the whole way to the end of this post, you deserve a gold star too!  I really should make sure the next few posts are light and easy on the eyes.  Hopefully, after the extended break, someone besides my grandma is still reading!
Posted by Unknown at 5:14 PM 1 comment: